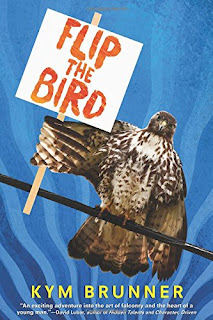 Mercer Buddie wants two things in life: a girlfriend, and the chance to show his father that he is serious about becoming an apprentice falconer. But on the day he and his master-falconer dad set out to capture a juvenile Red-tailed hawk, 14-year old Mercer screws up. He had one job to do: remember the mouse.

Time is ticking as they stop by a pet store to get a replacement mouse - bait for the trap that will humanely snare the hawk (and allow the mouse to be released into the woods). Will the hawk still be there when Mercer and his dad and brother arrive? And how long does it take to buy a mouse anyway? Turns out - when the girl of your dreams is in the pet store - it can take too long.

Mercer's dad is a demanding falcon master. He also runs a wildlife rehabilitation center, and is constantly impressing upon Mercer the need to do things correctly, so he doesn't lose his license (and livelihood). Mercer's older brother is working his way toward master-level. And the girl of his dreams? She's a member of HALT - a fanatical animal rights group that opposes mistreatment of animals including keeping hawks in cages. Shades of Romeo and Juliet...

Mercer tries to keep his hawk (named Flip) and his dad's rehabilitation center secret, but eventually the two worlds collide. When HALT members vandalize the center and release the birds, Mercer realizes he needs to take responsibility and do what's right.

I love the tidbits of falconry history and lore scattered throughout the book - like that people have been hunting with falcons since 2,000 BC! I loved the description of the mews, and crafting the hoods and leashes, and the training that Mercer and Flip shared.
So I just had to ask author, Kym Brunner Three Questions:

Kym: I went to a dinner show at Medieval Times, and near the end they had a falconry demonstration. I remember thinking, Wow! I never knew you could train a hawk to fly around and come back to you on command! I came up with the idea of a time-travel story of a modern kid going back into medieval times - and then found out I'd have to do a ton of research for medieval times AND for falconry. Eeek! So.... I decided to write a contemporary story about falconry.

Sally: You have so much authenticity in the story. What kind of research did you do?

Kym: I knew I wanted a story that revolved around falconry, but wasn't sure what the plot would be. So I took falconry lessons - six or more seven-hour apprentice lessons at SOAR (Save Our American Raptors). The master falconer told us a story about how they were once scheduled to do a demonstration at a forest preserve and animals rights demonstrators showed up. They made so much noise that the falconers had to cancel the event. When I asked about going on a hunt with a group of falconers, the SOAR leaders (George and Bernadette Richter) connected me to Troy, a falconer who lived in my neighborhood. Troy was extraordinarily helpful. He let me study his mews, and go on a couple hunts. Later, he read my manuscript to check for accuracy.

If I had one wish it would be that I could convey how dedicated falconers are to these majestic birds, and how fragile the relationship is between bird and prey. There are no guarantees; may the best bird - or prey - win.

Sally: I love the "Romeo/Juliet" aspect of the story. How did that evolve over the writing?

Kym: At first I thought about having a random group of protesters mess things up for Mercer and his family. But then a wonderful "what if..." question popped into my mind. What if, instead of being a random protester, the ones responsible for causing grief to Mercer's family business ended up being the parents of the girl he was hot for? The more I thought about it, the more I realized what a quandary that would be. I once dated a guy in high school who had a motorcycle - something my parents had forbidden me to ride. But this guy was cute and mysterious... so we met at the end of the block so my parents wouldn't know that he had a bike. I think being in love can override a lot of rational thought... and that's exactly the turmoil I hoped to portray in Flip the Bird.


Review copy provided by publisher.
Posted by Sue Heavenrich at 12:30 AM