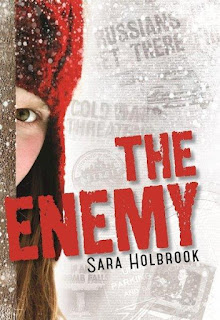 It's 1954 and twelve-year-old Marjorie is hunkered down behind the walls of a snow fort with her friend, Bernadette. She's got a pile of snowballs to pelt the enemy - Bernadette's brother, Artie. But Artie doesn't want to be the "enemy" - a Nazi. He wants to be Al Capone instead.

"This is war," yells Bernadette. "We're the good guys. You're the bad guy. That makes you a Nazi."

Marjorie is coming of age during the cold war, when there are so many enemies: Nazis, communists, the new girl, Inga, and a strange man lurking around the neighborhood. Marjorie wants to know how to determine who are friends, who are enemies, and how to know the difference. Then there's the question of right and wrong, and whether she'll go to jail for hiding "dangerous books" under her bed. Books that may or may not have been stolen from the library and probably should be  burned for their radical ideas. Books like 1984 and The Grapes of Wrath.

And then there's the demand by Bernadette that she sign an oath of loyalty to her friends. Who demands loyalty oaths? While she writes of a bygone era, Sara could be writing a story about today's issues of immigration, intolerance, religious and racial divide.

Sara Holbrook, grew up in post-war Detroit, a city, she says, that was separated by race and ethnicity. She talks about growing up in that era, and about her family, displaced people, returning soldiers, and more in her author's note - and follows up with a great bibliography for curious readers who want to know more.

On Monday we'll be hanging out on Marvelous Middle Grade Monday with other  bloggers over at Shannon Messenger's blog. Hop over to see what other people are reading. Review copy provided by publisher.