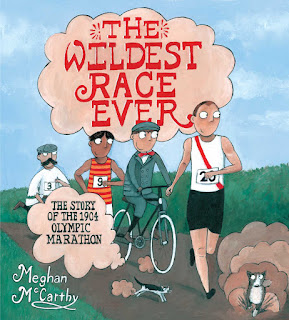 The first Olympic marathon held in America happened on august 30, 1904, in Saint Louis, Missouri. It was part of the World's Fair exhibition.

Thirty-two runners started that day, representing the US, South Africa, Cuba, France, Greece, and Newfoundland (now part of Canada). The first American Indian to run in Olympic Games was there, from the Seneca Nation. It was hot, and the cars carrying judges, doctors, and reporters stirred up so much dust that racers had a hard time breathing!

What I like about this book: Meghan McCarty tells stories about individual runners - like the guy who stole peaches from a car, and the runner who was chased a mile off course by an angry dog. It's a true story, so there's a couple of pages of back matter - and you know how much I like back matter! 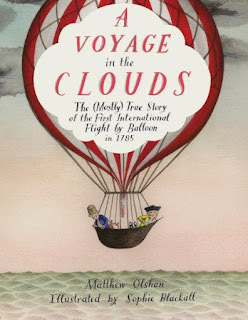 This book is subtitled: the (Mostly) true story of the first international flight by balloon in 1785. It tells the story of Dr. John Jeffries, an Englishman, and his pilot, Jean-Pierre Blanchard, a Frenchman, to be the first to fly from one country to another.

There's only one problem: they can't stand each other!
Okay, there are a lot of problems. They lose tools. They lose altitude. They lose their tempers.

What I like about this book: It's FUN! I like the dialog balloons that reveal their bickering. I like that they had to pee over the side to lighten the balloon so they wouldn't crash land. And I really like the notes in the back matter that clarify what's fact in this very imaginative story.

What would it be like to balloon across the English Channel? Here's a tale about two guys who recreated the trip of Jeffries and Blanchard.

Build a "hot air" balloon using helium party balloons, a plastic grocery bag, and a paper cup. Put two balloons into the plastic bag. Tie a ribbon from each handle of the plastic bag and attach the paper cup. Fill it up with pennies and send it on a journey around the house.

Run - or walk - a marathon. A marathon is a bit over 26 miles. Elite runners can finish in just over two hours; walkers take 8 hours or longer. Why not do your own marathon, but a couple miles a day? Plot out a two-mile loop (if you walk a mile to school, that's perfect). Then draw a race course on a sheet of paper and mark it off into 26 squares. Each day, color in a square for each mile you run or walk. When you finish your marathon, give yourself a gold medal.

Today is PPBF (perfect picture book Friday), an event in which bloggers share great picture books at Susanna Leonard Hill's site. She keeps an ever-growing list of Perfect Picture Books. Review copies from publishers.
Posted by Sue Heavenrich at 12:30 AM