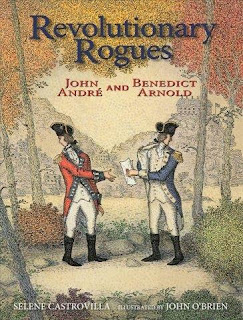 Major John Andre was bright and well educated. He served in the British army and, in 1779 was put in charge of secret intelligence.

Major General Benedict Arnold was one of America's finest soldiers - even George Washington agreed. But reward and recognition passed him by, and after being shot in the leg at Saratoga, he knew he would not gain glory on the battlefield.

What drew these two men into collusion? Was it Arnold's wife, a British sympathizer? Was it that both men wanted to see an end to this war?

Author Selene Castrovilla takes readers through a fast-paced espionage adventure, highlighting the similarities and differences in these two Revolutionary rogues. The tragedy: that they brought about their own tragic ends. A great read for any young historian. Back matter includes timelines for each soldier and, for those who like to dive deeply into history, a list of places to visit in New York and London.