Unpresidented ~ a biography of Donald Trump

Before I get to the review of this wonderful new piece of nonfiction I've got a quick reminder for writers. Whether you're working on picture books, chapter books, sci-fi, nonfiction, YA or MG -  if you're brainstorming ideas, then head over to StoryStorm at Tara Lazar's blog. For the month of January she'll post inspiring words for writers of all genres. StoryStorm started January 1, but registration is open through Monday, January 7. Register here. Thirty ideas in thirty-one days. That's doable.

And now... onto some great nonfiction writing! 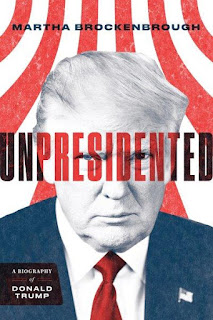 Weighing in at 400-plus pages and more than an inch thick, this biography doesn’t waste words on frivolities. Author Martha Brockenbrough dedicates her newest book to the Parkland generation (“You know what to do”) and then dives into a very readable – and critical – biography of a sitting president.

But first she takes time to clarify journalism’s role in history. In particular, how journalists and other nonfiction writers uncover facts and – more importantly – take the time to verify them. In particular, Brockenbrough writes about the spread of false information, and how we know that Trump does, indeed, spread lies. She clarifies what fairness and balance mean in the context of telling truths, and then tosses in this caveat: it’s difficult to write accurately about Trump because “he often speaks inaccurately about himself.”

I like the structure of the book: beginning with the election, flashing back to his immigrant parents, and then to Donald J’s childhood. Born into wealth, he started life lucky, writes Brockenbrough. But he lost his mother at a young age and, as he grew older, he became a bully. He caused so much trouble that his father sent him to a military academy, hoping the experience would make him shape up.

Brockenbrough follows Donald through his business ventures where his driving goal was to do whatever it took to win. Those brash – and questionably ethical – tactics followed him into entertainment and then into his candidacy for the highest office of the land.

“Trump appeared to be looking at the campaign the way a salesman looks at a product he wants to move,” writes Brockenbrough. “What do people want to hear?”

Brockenbrough writes about the Russia connections, the debates with Hillary Clinton, FBI investigations and hacking. She shows how unprepared he was to win and how little he did to prepare himself for the transition of power after the election. Brockenbrough does a marvelous job comparing and contrasting Trump and Robert Mueller, and details the ways the 45th president is using his office to enrich himself. She lays out clear evidence for his assault on democracy and a free press.

Provable facts matter, says Brockenbrough. “It’s one thing to make a partisan argument based on different political philosophies. But it’s another thing to ignore or misstate facts to protect a political party or its leader.” Once you leave facts in the dust, you’re on your way to fascism.

Brockenbrough provides a hefty section of back matter: a timeline of Trump’s life, his presidency, thumbnail bios of key campaign staff and political advisors – names you’ve heard in news reports and many of whom are under indictment. There are more than 50 pages of endnotes documenting quotes, and a handy index with entries including “racism” and “Russian election interference”. 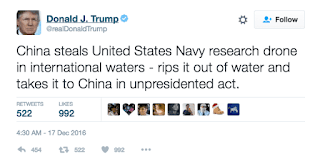 I appreciate that the title of this book came about in the most organic fashion possible: from a tweet by Trump. And though it is considered a YA book, I think many adult readers will find it a handy reference.

You can find out more about Martha Brockenbrough and her books at her website.

On Monday we'll join the roundup over at the Nonfiction Monday blog where you'll find even more book reviews. Review copy is from my personal library.