Lost in the Antarctic

A couple months ago I read Tod Olson's book, Lost in Outer Space, a story about Apollo 13. It was so fun to read that I knew I had to grab a copy of one of his new titles in the Lost series. It being one of those winters where the polar vortex comes whistling down with below-zero temperatures, this one seemed the perfect choice! 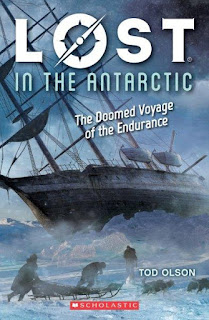 Lost in the Antarctic: the doomed voyage of the Endurance
by Tod Olson
224 pages; ages 8-12
Scholastic, 2019

Weddell Sea, Antarctica.
October 26, 1915
The ship didn't stand a chance, and Frank Hurley knew it. He'd been in the engine room with the carpenter, trying desperately to keep the water out.

The ship is the Endurance, trapped in a sea of ice 1,000 miles wide. She is being squeezed to death by the ice. With no time to spare, the crew rescues crates of food and pike tents and sleeping bags on the ice. For fourteen months the crew and scientists of this expedition to the Antarctic had made this ship their home. Now, in zero-degree weather, they would leave it and head off onto the ice. And, if they are lucky, to safety.

Lost is the tale of Ernest Shackleton's 1914 expedition. His goal: to cross the Antarctic continent by dogsled - a trek of 1800 miles. But to get to the continent they first had to navigate the Weddell Sea. And they were stuck in the ice.

Like other books in this series, it is a page-turning read. Gleaning stories from journals and letters, Tod Olson gives readers an inside look at an expedition that went sideways. There are maps, photos, packing lists, and enough ice and frigid weather to make you head to the kitchen for a mug of cocoa. He puts it in historical context: England was on the cusp of entering World War I as the Endurance set sail. While young men fought and died in trenches, Shackleton's men fought the elements and, sometimes, each other to survive.

There are moments of shared fun: a soccer game beneath the midnight sun; a race to determine once-and-for-all the fastest sled dog. There are moments of sheer terror: watching the ship sink with their stores of food; a wild slide down a glacier. There is no way you can read this book and not come away with a greater appreciation for central heating and a neighborhood grocery store.

Back matter provides perspective on Antarctica in this age of climate change, a list of sources, and end notes documenting dialog and events. If you're interested in learning more about the Endurance, check out the Weddell Sea Expedition. An international crew of scientists are exploring the Weddell Sea off Antarctica, using underwater robots, drones and other state-of-the-art technology. You can read their expedition blog here. But you may want to put on some gloves and a hat first!

Thanks for dropping by today. On Monday we'll be hanging out at Marvelous Middle Grade Monday with other  bloggers. It's over at Greg Pattridge's blog, Always in the Middle , so hop over to see what other people are reading. Review copy provided by Blue Slip Media.