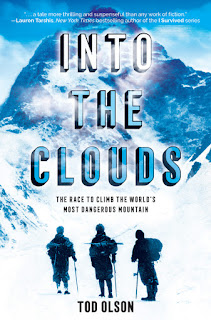 Into The Clouds: The Race to Climb the World’s Most Dangerous Mountain
by Tod Olson
288 pages; ages 10-14
Scholastic Focus, 2020

All they needed were three good days. Three days without winds strong enough to blow them off the mountainside… Three days of weather clear enough to see the route between their lonely tents and the top of the second-highest mountain on Earth.

But on the afternoon of August 6, 1953, Charlie Houston knew the odds of getting those three days were slim. This was not his first attempt to summit K2, the second highest peak in the world. It was a craggy peak located on the border of China and Pakistan, about 900 miles northwest of Everest. Formidable and unforgiving of mistakes.

The first time Charlie climbed K2 was in 1938. His mission: to discover a route that would allow climbers to make it to the summit the following year. The next year, Fritz Wiessner set off with an expedition to conquer the peak. But mistakes and ego resulted in tragedy.

And now, fifteen years after his first attempt, Charlie was once again trying to find a route to the top. But a vicious storm and sudden illness puts the expedition on the edge of disaster. What began as a quest reach the summit turned into a rescue mission.

Into the Clouds is a tale of adventure, for sure. You will find yourself pulling on a sweater or heating up a mug of tea to drink as you read – because it is cold on that mountain! But Tod Olson examines a philosophical divide in the climbing community. Is a climbing expedition the means to allow an individual to reach the top to mark a personal triumph? Or is climbing, as Charlie believed, a team effort? A “fellowship of the rope” that understands no single person can reach a summit without the team.

Olson tells the stories of three expeditions and climbing rivalry. Fortunately, you won’t need crampons or an ice ax to enjoy this adventure; Olson has done the hard work of pounding in the pitons and setting a guide rope. All you have to do is enjoy the story. Be forewarned: it is page-turning nonfiction and a story you will not want to put down, so make sure you have adequate provisions before setting off on this adventure.

If you like nail-biting nonfiction adventures, check out Olson’s LOST series. Last winter I posted a review of Lost in the Antarctic, a tale of Ernest Shackleton's 1914 expedition.

Thanks for dropping by today. On Monday we'll be hanging out at Marvelous Middle Grade Monday with other  bloggers. It's over at Greg Pattridge's blog, Always in the Middle, so hop over to see what other people are reading. ARC provided by Blue Slip Media.