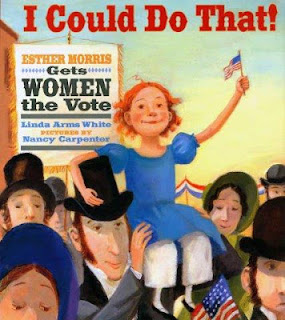 I Could Do That! Esther Morris Gets Women the Vote
By Linda Arms White; illustrated by Nancy Carpenter
40 pages, ages 7 - 9
Melanie Kroupa Books (Farrar, Straus and Giroux)  2005
“In 1820, six-year-old Esther McQuigg studied her mother making tea. ‘I could do that,’ she said.
‘Make tea?’ asked Mama. ‘The older girls do that.’
‘But I want to learn,’ said Esther, and she did.”

So begins the story of Esther Hobart Morris, a woman who thought women “could do that” – whether it was supporting their families with jobs to voting for president.  Linda White paints a portrait of a young girl who has gumption and doesn’t let social convention hold her back from her dreams.

She eventually remarried, saw one son off to the Civil War, attended lectures by Susan B Anthony and retained her belief that one day she would vote. In 1869 she joined her husband and oldest son in South Pass City, Wyoming where she opened another hat shop.

“One day,” writes White, “Esther read a proclamation tacked to a wall: ALL MALE CITIZENS 21 AND OLDER ARE CALLED TO VOTE IN THE FIRST TERRITORIAL ELECTIONS. Esther looked around at the disorderly young men.
‘It’s time I did that,” she said.”

After a politically strategic tea party, lots of lobbying and a testy legislative session, she and the women of Wyoming won the vote. That same year she was elected to public office, and became the first woman justice of the peace in the nation and the world – but that’s a different story.

What I love about this book is the theme of “I can do that” – a sentiment all children can identify with. Check out more nonfiction about amazing women and other cool topics over at Supratentorial today. Review copy from Finger Lakes Library System.
Posted by Sue Heavenrich at 12:30 AM