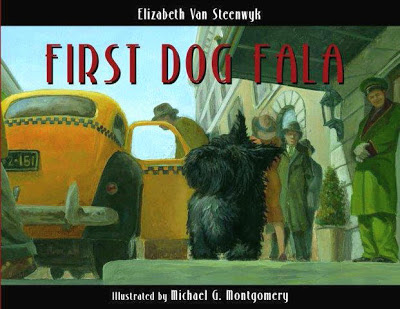 President Franklin D. Roosevelt lived and worked in the White House, writes Elizabeth Van Steenwyk. His days were long and filled with meetings and phone calls, and at night he was often alone. But that changed when, in 1940, a Scottish terrier came to live with Roosevelt in the White House. Fala attended important meetings, played on the lawn and, ate dinner with the president.

Fala was there when Japan bombed Pearl Harbor. He was there when Roosevelt sent American boys to war, and when the president announced the invasion at Normandy.

What I like: History told through a story of friendship. I also like imagining life as a White House Dog: hearing secrets, slipped treats from White House reporters, traveling with the First Family…..

Beyond the book: Fala isn’t the first White House dogs. Presidents from George Washington on have had pets – even the Obamas have a dog. You can learn more about presidential dogs (and other pets) here and here. Then, when you think you know who’s who in Presidential doggy history, challenge yourself to a game of “First Dogs” here.

This review is part of PPBF (perfect picture book Friday), an event in which bloggers share great picture books at Susanna Leonard Hill's site. She keeps an ever-growing list of Perfect Picture Books. Review copy provided by the publisher.
Posted by Sue Heavenrich at 12:30 AM