A Kite, A Waterfall, A Bridge 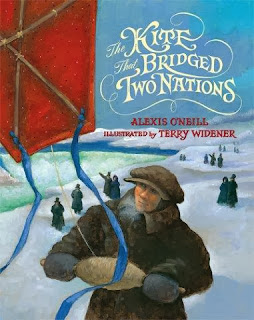 In 1848 an ordinary boy flew a kite across Niagara Falls and helped build a bridge. His name was Homan Walsh and he was 16 years old. He built the kite for a contest - a contest sponsored by the US and Canadian bridge-building companies to generate publicity for their endeavor of building a bridge to span the falls and connect two nations.

There were news articles, and later the event was included in history books. But author Alexis O'Neill wanted to tell the tale from the Homan's point of view - a kid who was caught up in the (air) currents of history.

Homan loves to build kites. What seems like play to his father ("Apply yourself, Your studies must come first.") is filled with learning: "reading the wind, calculating lift, gauging line length...". We see Homan building his kite from the spars up, cutting the sail from calico in Mother's sewing basket, adding tails and finally twine - more than a thousand feet to reach across the gorge that separates Canada from the US.

There's adventure, too. After determining that the best wind comes from the Canadian side, Homan rides across on the ferry. Like any good adventure story, his first attempt fails, and he is trapped across the gorge by ice that halts ferry traffic for days. But does Homan give up? No - when he finally gets home his first order of business is to repair his kite and try again. There's a lot at stake in his venture: prize money and a chance to go down in history.

This is a true story. But, says O'Neill, the dialogue is created to "express emotions that are not obvious in the straight narrative accounts of this event." In her back matter she outlines what is known about the facts of the event, and what is not known. For example, in her story she mentions a handbill advertising the kite contest. While there was a contest, no one has found evidence of how the contest was promoted. Handbills - like the flyers of today tacked to telephone poles - were a common way to announce things.

O'Neill includes a timeline of the bridge construction, adds sources and websites for further exploration, and even provides a link on how to build your own barn door kite - the kind that was popular when Homan would have built his kite.

Which leads to this question: While a true story, is this nonfiction? Dianne White asked O'Neill about this very issue in a recent interview posted at ReaderKidZ.  O'Neill's resoponse: "... if a writer makes up even one teeny, tiny thing that can’t be verified (a piece of dialogue, a neighbor’s name, an emotional reaction), the piece becomes fiction. Nonfiction means that everything is verifiable." She calls her story "historical fiction". But since it is about a real person, and is factual, other people would consider it a "fictionalized biography" - meaning that the story is pretty much true except for some dialogue.