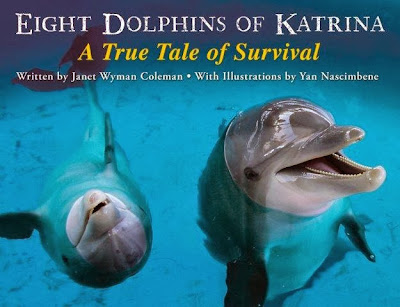 In the early morning hours of August 29, 2005, Hurricane Katrina slammed into Gulfport, Mississippi. A huge wall of water washed over the Marine Life Oceanarium, crushing the dolphin house. A scant few hours earlier, trainers had moved some of the dolphins to temporary quarters in hotel swimming pools four miles inland. But eight dolphins were left in the Oceanarium.

When the trainers returned after the hurricane, the dolphins were gone. They were swimming free in the ocean. But there was a problem: the dolphins had been raised in captivity and didn’t know how to feed themselves in the wild. Using helicopters and motorboats, the trainers searched for their dolphins. This is the story about how the rescue operation – how they trained the dolphins so they could lift them out of the ocean and transport them back home. It’s also a story about how dolphins have rescued people. There’s also a “scrapbook” with photos and diary entries of the rescue operation.

This is part of the Nonfiction Monday round-up. You can find more reviews of kid's nonfiction over at Apples with Many Seeds. Review copy provided by the publisher.
Posted by Sue Heavenrich at 12:30 AM