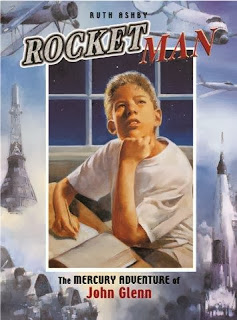 There were too many clouds in the sky for me to see the solar eclipse earlier this month, so I dug into my reading basket for something about space. Rocket Man is the story of the first of many of my space heroes - John Glenn.

Glenn wasn't the first man to go into space, but he was the first US astronaut to orbit the earth. And he's the one I remember... watching the tiny black and white TV set up in the school auditorium to see the blast-off and, later, wondering whether he would make it safely back to earth. A couple years later we'd be watching Captain Kirk on the bridge of the Enterprise... but in the real world, space exploration was just beginning.

Rocket Man follows John Glenn through his Navy pilot training and into the astronaut training program. He was one of the "Mercury Seven", pioneers of manned space flight. Ruth Ashby describes the tough training programs and some of the disappointments of the early years: rockets exploding, the Soviets sending a cosmonaut into orbit first... would the American space program get off the launchpad? 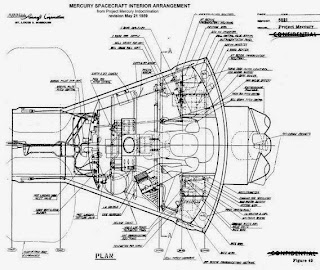 When Glenn finally did get into space - in a Mercury capsule so small that it was barely big enough for one person and the instrumentation. Things were tense for awhile when Mission Control wasn't sure the heat shield was OK, but Glenn managed to make it back through the atmosphere for a splashdown without burning up.

Ashby ends the book with information about the space program and provides resources for curious space cadets. Space exploration has changes over the past 50 years, with an international space station and astronauts who tweet and send videos back to students on earth. Check out my post about another astronaut over at Archimedes Notebook. And check out STEM Friday to see what other folks are reading. Review copy provided by publisher.