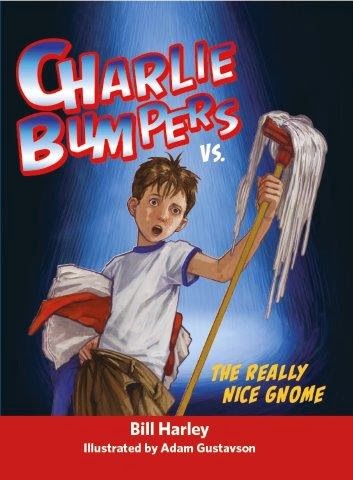 Charlie’s class is presenting a play – and Charlie knows exactly what part he wants. In fact he’s been practicing his evil laugh for days. But when Mrs. Burke calls her thespians to order, Charlie doesn’t see his name next to the Evil sorcerer Kragon. Nope – he’s got the part of the Nice Gnome.

“If I had to make a list of parts I did not want in the Sorcerer’s Castle, the Nice Gnome would be at the very top,” thinks Charlie.  Now he has to make a costume with a pointy hat and golden shoes… and gnome pants. And get over the fact that his friend gets to do the evil mwa-ha-ha laugh on stage.

To make it worse his sister, the Squid, wants to walk the dog (she’s too small) and his brother just makes fun of Guh-nice Guh-nomes. And the killer rabbit escapes from its cage.

Storyteller Bill Harley (who also sings funny songs) entertains us with a second volume of tales of Charlie Bumper, focusing on the big worries and small victories that fill a fourth grader's world. But there's more - Charlie has his own blog, where you can get the recipe for his favorite food (train wreck) and see the trailer for this book.

Join the Blog Tour and drop by tomorrow's stop at  The World of Peachtree Publishing. Today is also Marvelous Middle-Grade Monday round-up. Drop by to see what other bloggers are reviewing. Review copy provided by publisher.
Posted by Sue Heavenrich at 1:00 AM