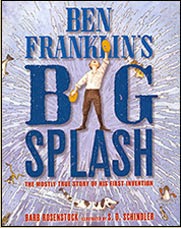 Is this book nonfiction? Is it historical fiction? Does it really matter?

This much is true: Ben Franklin taught himself to swim. Around the age of eleven, he made the first pair of swim fins and tried them out in the Charles River. He even wrote about his invention in a letter to a fellow scientist many years later.

But he never wrote about how he made the fins or the process by which he developed them. That is the part that author Barb Rosenstock imagines.... and she does so with humor and such wonderful language that you will be drawn into this book immediately upon opening it.

"Before the world knew the famous Doctor Benjamin Franklin, his neighbors knew him as Ben, the sturdy, saucy, smelly son of a soap-maker..."  Ben was the kid who would sneak away from work to swim in the river. As Rosenstock puts it:

Don't you just love the language she uses to describe this skinny kid playing around in the water? While he's swimming, he wonders why he can't swim like a fish.

So he observes the fish. He notices they have fins, where he has hands.... and perhaps that's where he gets his idea for swim fins - wooden paddles that he uses to swim through the water. Like any other scientist, Ben experiences failure, goes back to the drawing board, and tries something different. Question-Research- Hypothesize - Test - Analyze- Conclude - Repeat.... these are the foundations of the scientific method, and Rosenstock shows Franklin going through them all.

Did it happen exactly the way she wrote it? Probably not. That's why she ends with a lengthy author's note telling what is known and what she imagined. At the end there's a timeline of Franklin's life and lists of resources.

Whether it's a "true story" or not, this book offers a glimpse into an unusual childhood invention of a famous inventor. And it does so through fun, imaginative language. With the story focusing on Swim Fins, there's a preponderance of S-words on the page. They are fun to s-s-say...

More to the point, this is a guide for any kid who wants to do science. If Ben could do research, design and test prototypes, collect and analyze data, then anyone reading this book can do the same. You don't need to be stuck in a lab to make discoveries... you can swim in a river.

Today we're joining the roundup over at the Nonfiction Monday blog where you'll find even more book reviews.  Review copy from publisher.