You Call That Brave? 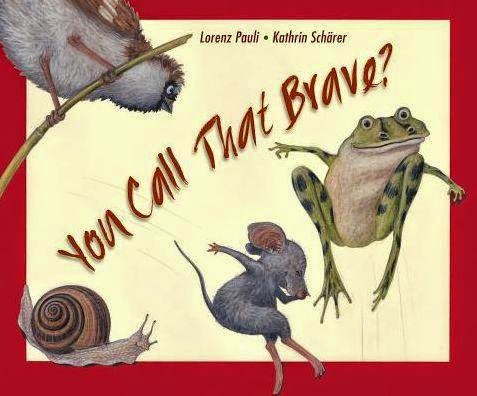 They decide to have a competition to see who is the bravest. One by one they each pick a feat that to them is fearsome, but to one of the others it's nothing special. Like swimming across the pond - "You call that being brave?" asks frog. "That's just having fun!"

What I like about this book: When each critter accomplishes his feat, the others acknowledge his achievement. Bravo! I also like how one thing might seem scary to one animal, but it's fun to another. After frog and mouse and snail do strange, albeit courageous things, it's sparrows turn. He hems and haws and struts about a bit.... (I don't want to spoil it for you) and in the end they all clap for his act. I also love the illustrations. Each animal is drawn with such distinctive personality. The only thing that bothered me was referring to snail as having antennae. Maybe they meant the eye stalks - perhaps something got lost in translation? (originally published in Switzerland in 2006)

Beyond the book: It takes courage to try something new - like jumping off the diving board the first time, or learning how to ski, or standing up in front of a class to say something. What are some things that you found scary the first time you tried them?

Make a Bravery Badge to give yourself an extra bit of courage. Directions here.

Look for examples of Bravery in real life. Recently a policeman rescued people from a burning apartment, and there's an elder who continues to feed homeless people even when he's threatened with arrest. Maybe you know someone in your town who rescues abandoned dogs, or goes to town council meetings to speak on behalf of protecting the environment from development.

Find quotes about bravery. Remember in Harry Potter and the Sorcerer's Stone, when Neville challenges Hermione and Ron and Harry for the dangerous thing they are going to do? Dumbledore recognizes the courage that took: "It takes a great deal of bravery to stand up to our enemies, but just as much to stand up to our friends." You can find more quotes about courage here.


Movie night: pop up some popcorn and pour some drinks and pop on a video about people acting bravely. My favorite is the one about that spirited red-head from Scotland, Brave. This one has layers of bravery - right to the core of facing the results of your own actions.

Today is PPBF (perfect picture book Friday) over at  Susanna Leonard Hill's site. She keeps an ever-growing list of Perfect Picture Books.  Review copy from the publisher.
Posted by Sue Heavenrich at 12:30 AM