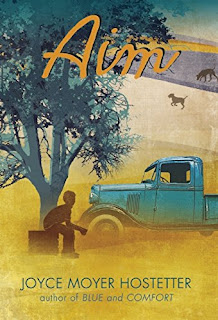 Fourteen-year-old Junior Bledsoe would like nothing better than to play baseball, but he can't make practices because he's got to take care of the farm chores when Pop goes off drinking. His pop's not a bad guy - he fixes folks' cars and never takes money for it - but he's got his own problems.

Junior's got his own problems, too, including his new roommate - granddaddy. Granddaddy loves baseball, too, and listens to games on the radio - except when he's listening for news of the war. So far, the US has managed to stay out of it, but for how long?

Then there's school. Junior wants to do something more useful than practice penmanship. And he's tired of getting picked on. Things change when Pop dies, and Junior quits school to take care of the farm. But he wants more. He wants to be of use. And he wants to find out whether someone had a hand in his Pop's death. What starts as an attempt to make friends with the bully leads Junior into a series of bad decisions.

What I like about this book is the way Joyce Hostetter pulls you into the world her characters inhabit. She brings Hickory, North Carolina to life in such a way that you'll be checking the map to see if it really exists (it does) and whether you can hop a train to get there (you can't).