Putting the focus on photographers

Two books about photographers, contemporaries of each other. One captured light and rocks and trees, the other focused her sights on factories, buildings, and people. One grew up in the west, the other in the east. 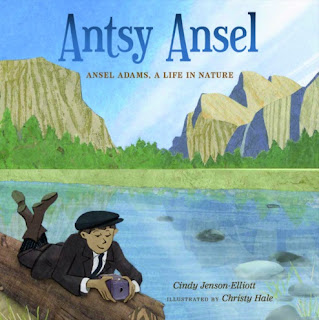 Ansel was antsy. He never walked - he ran.

He loved being outside - exploring the beach, feeling the wind and salt spray. He didn't fare well trapped in the classroom, but thrived when his father decided to have him learn at home.
When Ansel was 14, he visited Yosemite Valley and fell in love with the light. His parents gave him a camera, and the rest is history. He traveled far and wide taking photos of national parks, and his photos were featured in Life magazine and galleries.

What I like about this book: It is fun to read. Author Cindy Jenson-Elliot delves into her collection of action words to show this young man who couldn't sit still. Run-leap-scramble... off he goes with his camera! I also like the back matter, where she tells more about this iconic photographer. Ansel Adams spent a lot of time studying his subject matter, waiting for the right light to capture it. 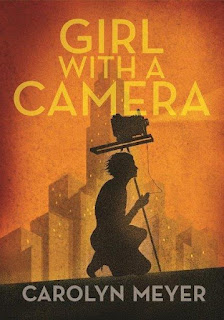 Margaret Bourke-White was born in 1904 - two years after Ansel Adams - in New Jersey. She wasn't popular, and felt unsure of herself, yet knew she would do something great. She spent her youth exploring the outdoors, collecting snakes and bugs, and thought she might become a herpetologist (someone who studies reptiles and amphibians). Then she discovered photography. And the beauty within buildings, from factories to sky scrapers. She knew she wanted to make her living shooting photos.

This fictionalized account of her life draws on Margaret's own writings, as well as archival material and yearbooks. It reads like an adventure, as we read about Margaret's adventures as a photo-journalist for Life magazine: trips to Russia, capturing factories and farms, and a nearly-didn't-make-it trip to the arctic. Author Carolyn Meyer had done a ton of research, and it shows.

Both Ansel Adams and Margaret Bourke-White documented World War II. Ansel took photos of ordinary life in the Manzanar War Relocation Center (Japanese internment camp) in California. Margaret was the first female war correspondent and photographed German forces invading Moscow. At the end of the war she photographed the liberation of the concentration camp at Buchenwald.

Beyond the Books:
Take a camera on a walk with you and take pictures of buildings or trees or rocks or people... whatever interests you. Try taking photos in different light - different times of day - and from different angles.

Today is PPBF (perfect picture book Friday), an event in which bloggers share great picture books at Susanna Leonard Hill's site. She keeps an ever-growing list of Perfect Picture Books. On Monday we'll be hanging out on Marvelous Middle Grade Monday with other  bloggers over at Shannon Messenger's blog. Hop over to see what other people are reading. Review copies provided by publishers.
Posted by Sue Heavenrich at 12:30 AM