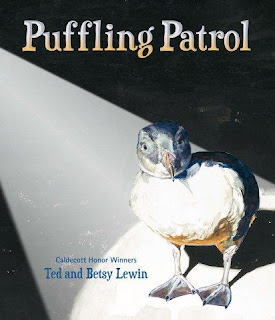 Every spring, hundreds of thousands of puffins make their way to the Westman Islands, off the south coast of Iceland. They build nests on the rocky cliffs, and spend the summer caring for their newly hatched chicks. By August, the young puffins – called pufflings – are ready to leave home and head out to the open sea. They fly off the cliffs at night and some, confused by the lights of town, flutter down onto the streets. Their wings are not strong enough to lift them off the streets, so children in the town give them a helping hand. Young members of the Puffling Patrol collect the confused birds and carry them to the shore to release.

Ted and Betsy Lewin tell the story of two of the children in the Puffling Patrol, Dani and Erna. The eight-year old twins take their job seriously, collecting boxes and gathering flashlights. When it’s dark, at 10 pm, they head out  into the rainy night.

“The sea will be the puffins’ home for the next two years,” write the Lewins. “If all goes well, they will return to Heimaey as adults and raise their own chicks.” And when they do, the Puffling Patrol will be ready.

Check out other books that celebrate nonfiction at Nonfiction Monday, hosted this week by Jean Little Library.
Posted by Sue Heavenrich at 12:30 AM