Cool Melons - Turn To Frogs! The Life And Poems Of Issa 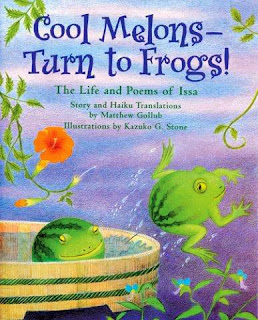 This is the story of Issa, born in 1763 on a farm in central Japan. He began writing poetry as a young child, inspired by his love of nature. At one point in his life he spent seven years walking across Japan, composing poetry along the way. He wrote more than 20,000 haiku and never lost his love for the little things.

Opening: “Issa was born long ago in a small mountain village in Japan. In the spring, plum blossoms washed through the air, and Issa heard farmers sing as they planted rice.” In the mountains, the four seasons change, filling Issa’s days with discoveries. His observations made their way into poetry – haiku that becomes part of his life story in this book. An illustration of a young boy:
A child intent
on plucking jewels
of dew in the morning grass.

Later, as a  young man on a journey of discovery he jots his observations down as poems:
A withered tree
blooms once again-
butterflies holding fast.

Once, writes Gollub, Issa saw watermelons left outside in a tub to chill. He felt sorry that someone would eat them up, and wished that they could hop away.
Cool melons –
turn to frogs!
if people should come near.

What I like love about this book: the delicious combination of text, haiku and artwork. In addition to lovely watercolor paintings, Kasuko Stone paints calligraphy down the margins. This book is fun to read and inspires one to grab a pencil and a camera and head outside to see what treasures the world holds.

Beyond the book: Explore haiku by…

…going on a haiku hike. Grab some index cards and write short haiku observations of things you see. This is a great activity for building science observation skills.

…carrying a haiku in your pocket. Find a cool haiku that you like and copy it. Maybe use a calligraphy marker so it looks cool. Put it in your pocket and, when you see someone you want to share it with, give it away.

… writing a cookie fortune in haiku. Fortune cookies may have been invented by a Japanese American who enclosed thank you notes in his grilled rice wafers.

… combining haiku with drawings or photography. That art form, called haiga, began as paintings that embodied the sensibilities of haiku.

… linking three or more haiku “verses” together in a longer poem.

Today's review is part of PPBF (perfect picture book Friday), an event in which bloggers share great picture books at Susanna Leonard Hill's site. She keeps an ever-growing list of Perfect Picture Books. On Monday I'm joining other bloggers for Nonfiction Monday - check out that blog for more great books. Review copy from my personal library.